Geido is one of our favorite Japanese restaurants in Park Slope — maybe the best for us in NYC after last night anyway. Why? The food is very good, and the atmosphere is nice. The best thing is, they have bunch of locals coming to the place just to eat, hang out, drink, and get wasted.

Osamu is the main chef, and obviously he is a big drinker. He allows his locals to stay in his restaurant just like home. I really mean it. Last night, we were there sitting at the counter in front of him. We always prefer to sit at the counter in Japanese restaurant, so it wasn’t anything special for us.  While enjoying fresh Sushis and Sashimis, we had a nice little talk going about how to call fishes in English.

After a half hour or so spending our time in front of him, he started giving us many nice small dishes — some kinds of Otooshi you might see in Japanese izakaya. They are sooo tasty, and I know they are not cheap — like Tako shiokara type of thing. He gave us easily five little free foods, so we decided to buy him a beer. He got our nice cold Nama (draft) beer and started cheering with us.

After sometime, his friend, now I know his name is James, came in and sat next to us. We already knew from a couple of last times in Geido, if you are a regular, you get your own chopsticks and even you can ask for a remote to put a baseball game on their TV. We saw James is getting the special treatment in the restaurant many times before, and we have been wondering — who is that guy? It turned out he is Osamu’s long time friend since he was working for a Japanese restaurant in TriBeCa before he started Geido 25 years ago.

James brought a full bottle of scotch for Osamu. Osamu opened it and started pooring the scotch to his and our(?!) glasses. We had our sips. Then you know what Osamu said? James, it’s like water. He brought his Johnny Walker he keeps in the counter. Pooring and drinking, and more pooring and drinking. I even got a shot of Shochu he has in the counter. I don’t know how many straight shots of Scotch and Shochu. I know Adam is getting drunk…. I had to wonder … Are they all free? It seemed to be free of charge, but who knows? When we paid our bills, we were too drunk to figure it out. Oh by the way, the bill wasn’t bad for what we ordered anyway. Of course, we left a lot of tips, hoping that is enough for these fansy drinks something you get in a hot bars.

We were super drunk when we left the restaurant just after 10 pm on a Monday night…..well I have to say it was a good time. I just hope it was a Friday night for that kind of hardcore drinking.

Now we are invited to their anniversary party on August 31. So are we becoming their locals? Are we getting our own chipsticks in the restaurant?

I don’t think so. We have to spend at least another 10 Monday nights like last night…. oh no…..

Well, it was fun. We will be back with a nice bottle of scotch or barbon, Osamu. Wait for us. 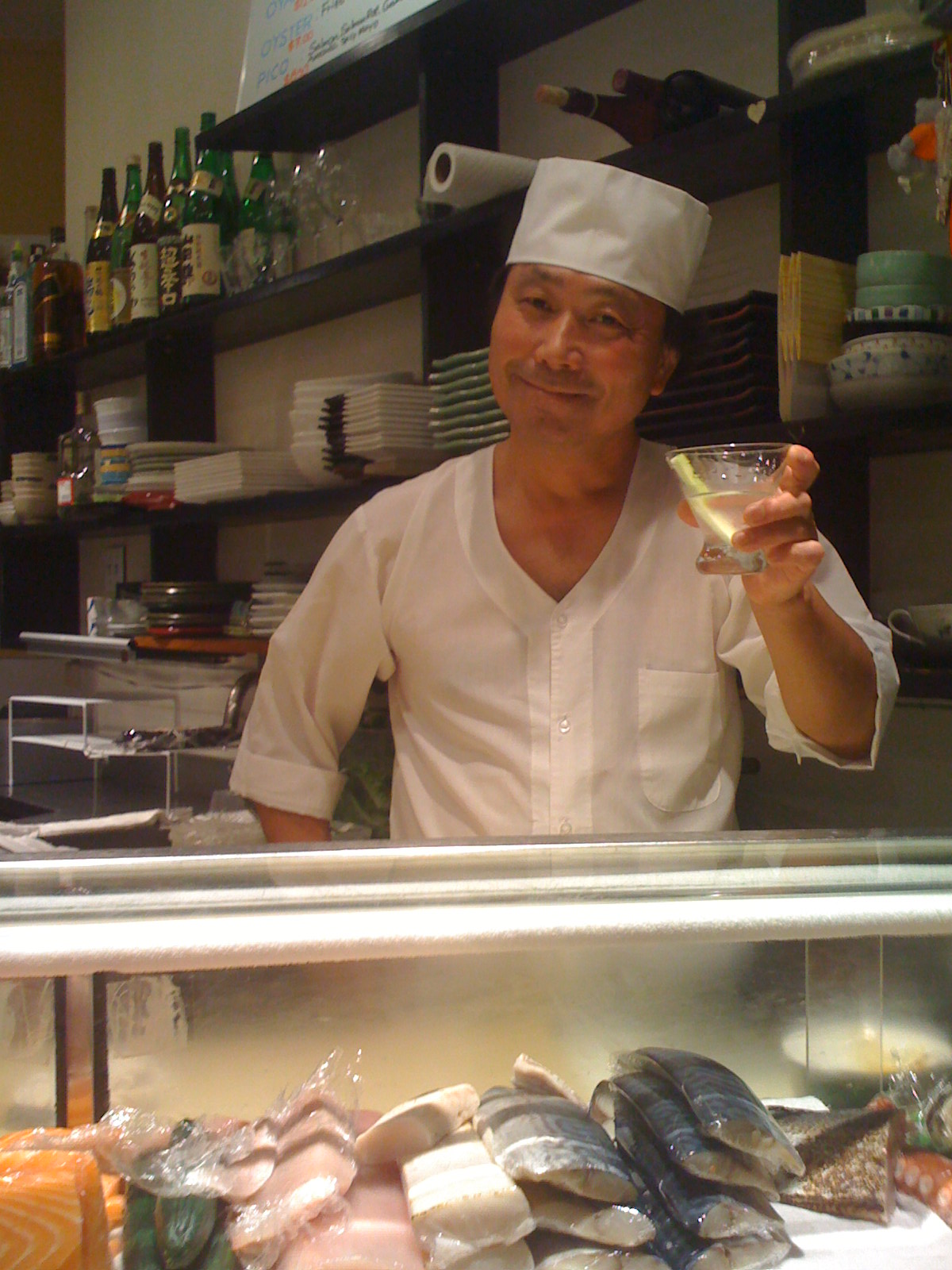